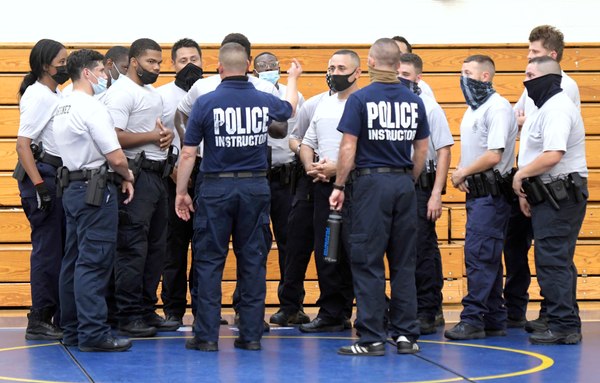 BALTIMORE — After a grueling defensive tactics class with a dozen other recruits, Antonio Martinez secures his expandable baton and wipes the sweat from his brow. He’s getting ready to make his debut as a rookie cop on the streets of Baltimore, a city with the dual misfortune of having high rates of violence and a dysfunctional police force.

At Baltimore’s police academy, the earnest 25-year-old from a law enforcement family said he wants to earn his stripes as a protector of neighborhoods. He was attracted by the agency’s recruitment pitches urging police hopefuls to become part of the “greatest comeback story in America.”

“There’s clearly a goal to change things up here. I want to be part of that change,” said Martinez, adjusting his department-issued duty belt.

Martinez and other cadets have an outsized job before them: help transform a beleaguered police agency struggling to reinvent itself amid a national crisis of confidence in policing. But the city’s thin blue line just keeps getting thinner. The Baltimore Police Department has roughly 400 vacancies among the force’s sworn staff and its recruitment efforts can’t keep pace with those leaving their jobs. Last year, the agency hired one above attrition for the entire year.

Amid the national reckoning on policing in the U.S. since George Floyd’s killing by an officer in Minneapolis, any number of police agencies have struggled to recruit and retain law enforcers. For Baltimore, a city with chronically high rates of violent crime and a dysfunctional police force laboring under a tarnished image, there’s a constant challenge in drawing enough recruits to stem the outflow, including retirements and a churn of younger officers with roughly three to seven years on the job giving up their badges.

While it’s hardly the first time that Baltimore’s force has been below authorized strength, the city is now facing new kinds of pressure. It has to meet hundreds of benchmarks for staffing, accountability, use-of-force policies and other matters before it can prove it’s a transformed agency and get out from under a sweeping oversight program.

Since 2017, the city has been under federal oversight after the U.S. Justice Department released a scathing report detailing longstanding patterns of racial profiling and excessive force. The so-called consent decree is similar to ones undertaken in places such as Ferguson, Missouri, and Cleveland. Some cities return to local control after a few years, others take far longer. The Oakland Police Department has been under a consent decree for nearly 20 years.

A staffing plan calls for 2,785 sworn officers, but city police had 2,398 members on payroll in recent months.

Those closely monitoring the federal intervention in Baltimore are increasingly voicing doubt. The judge overseeing the process, U.S. District Judge James Bredar, said without more bodies the city’s force “will be unable to meet some of the consent decree’s most basic requirements.”

Timothy Mygatt, a Justice Department lawyer, said staffing shortages are affecting the BPD’s ability to achieve compliance in critical areas. These include big shortages in the Public Integrity Bureau, which is down so many investigators that the average time to complete a misconduct probe is now eight months.

But the biggest worry is with patrol’s street-level policing, where Baltimore still routinely has to draft officers to work double shifts, something the decree says must be avoided as it could lead to more unconstitutional law enforcement.

“Tired officers are in a worse position to exercise good judgment,” Mygatt said at a recent hearing.

Rewriting department policy has been relatively smooth. But deploying a new model of community policing on Baltimore’s streets and gaining citizen trust — the core of the entire intervention — has barely begun.

Some residents wonder if Baltimore just needs to focus on implementing the big-ticket reforms since it’s hard to overstate the deep history of distrust between citizens in large swaths of Baltimore and police.

“People can’t see the reforms on the streets. There’s frustration,” said Ray Kelly of the No Boundaries Coalition, an advocacy group in West Baltimore, an area only too familiar with heavy-handed policing and sometimes a complete absence of patrols.

Baltimore Police Department spokeswoman Lindsey Eldridge said the agency will at some stage need to add positions to its budget authorization to meet the long-term staffing goals, but it’s prioritizing the filling of current vacancies before making any request. She also confirmed that 46% of job separations are due to retirement. Earlier this year, Baltimore’s City Council authorized a $555 million budget for the force despite pressures from various quarters to slash it. It included a $28 million increase. This was largely to cover pension obligations and higher insurance premiums.

Some experts who aren’t involved with Baltimore’s decree believe staffing might not prove crucial down the line.

Christy Lopez, a Georgetown University professor who has led Justice Department probes of police agencies in numerous U.S. cities, including Chicago and Ferguson, that police agencies can be more effective even if they’re smaller.

“It would be a huge step backward to respond to police being spread too thin by adding more police to continue doing the work that police should not be doing. Instead, we should narrow the scope of what police do,” Lopez said.

Police often are put in positions to deal with complex calls involving mental health and drug addiction, problems that clinicians and other community partners are better trained to deal with.

Patrol shortages are near daily in the city’s nine districts, which each have three shifts. The head of the local police union, Michael Mancuso, said routinely drafting officers to work patrol is punishing.

“Officers are burned out,” he said.

But in Baltimore’s training academy, new personnel are getting ready to become the next generation of officers. As two Associated Press journalists watched cadets on a recent morning, a trainer told Martinez and his fellow hopefuls not to get anxious about the press attention.

“Don’t worry about their cameras. Pretty soon, the public’s going to be watchin you 24-7,” he said.

By Mike CarterThe Seattle Times SEATTLE — The two officers roll up on a disturbance at a Burien park to find three men in a scuffle, one…