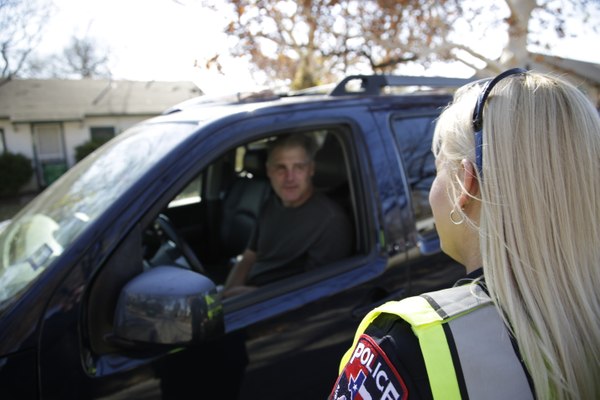 To view the complete results, fill out the form below to download the survey.

A third of respondents had 10-20 years of law enforcement experience and a quarter had 21-30 years of experience; a third had nine years or less on the job and 10% had more than 30 years on the job.

While 2020 saw a huge increase in speeding violations nationwide, in regard to non-speeding traffic violations, 41% of respondents said they had decreased in the past year and 17% had stayed the same. Forty-two percent said they had increased.

We wanted to know if officers had changed their behavior regarding traffic stops since 2019 and nearly two-thirds (59%) of those who responded said they were less likely to stop a vehicle in violation of traffic laws while on patrol than two years ago, while a third (36%) said there was no change. Only 2% were more likely to stop a vehicle.

We asked how compliance behaviors during traffic stops had changed over the past year. While half of the respondents said it had stayed the same, 49% said compliance had worsened.

The most common non-compliance behavior encountered was a failure to follow commands (42%) followed by a failure to answer questions (24%). Around 10% of respondents said refusal to show a driver’s license and other documents or furtive movements.

We asked respondents to list the actions they did at every traffic stop, whether as a result of personal habits or policies. Nearly all the respondents indicated that they notify dispatch they are on a traffic stop and tell the driver the reason they were stopped. They also request the driver’s license, registration and proof of insurance and scan the vehicle interior for hazards. Two-thirds of the respondents activate their body-worn camera during traffic stops and 57% active the dash camera; 62% percent conduct a license plate check before contact. Half of those surveyed touch the vehicle to leave their prints, while only 4% of the officers who answered this survey call for backup.

We asked respondents if there is a non-compliance red flag – a specific action, behavior, or response – they want every police officer to be aware of. Respondents contributed more than 500 red flag actions and behaviors. We compiled the top responses and themes in this article “Officers identify red flags for non-compliance during traffic stops” for verified officers access only.

We asked respondents if their department had made changes to their traffic stop policy in the last year. The majority (78%) said no, while a fifth (19%) said yes.

For the 24% of respondents whose agencies had implemented policy changes, many indicated those changes were due to social distancing requirements during the COVID-19 pandemic. A summary of additional changes is listed here:

We asked if department policy encourages that, when conditions allow, traffic stop approaches are made at specific locations, such as a well-lit convenience store or near a firehouse, even if it means following a vehicle for a short while. Nearly two-thirds of respondents (59%) said no, just over a third (37%) said yes and 5% were unsure.

We asked respondents what traffic enforcement tasks should be reassigned from law enforcement to another agency. Here is a sampling of some of the responses we received:

We wanted to know how much traffic-stop training was provided to respondents. The majority (50%) receive yearly training, while 42% do not receive any training. Only 6% receive monthly training.

Respondents were asked to select the types of training received for traffic stops with non-compliant drivers since 2019. Many respondents selected more than one method, with online training, legal case reviews, roll call briefings and classroom lectures are the most common type of training formats. Hands-on training and simulation are not as frequently encountered.

Nearly half of respondents believe they have not received adequate department-provided training for traffic stops involving non-compliant drivers, while a quarter strongly agrees or agree they had received adequate training.

Despite that lack of training, most respondents (84%) indicated they are confident in their ability to handle a non-compliant driver during a traffic stop.

We asked a series of questions regarding the type of training respondents had received regarding responding to non-compliant drivers during traffic stops.

NEXT: Using police observations on traffic stops to inform policy

To view the complete results of this survey, fill out the form below to download a PDF report.