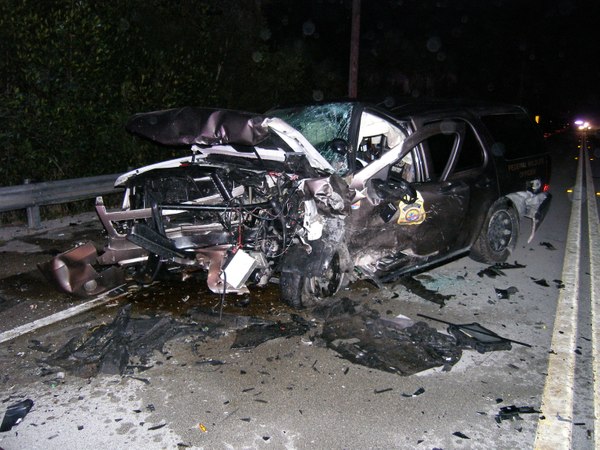 On December 2, 2015, John Eric Costello was a law enforcement park ranger working for the Department of the Interior, U.S. Fish and Wildlife Service in Florida. He had just returned home after completing an early shift and was looking forward to his wife’s arrival. His plans were interrupted when he received a call from his supervisor at 9 p.m., reporting some illegal activity in progress that he had to investigate immediately.

John loaded his squad vehicle, but before he left, he wrote two notes on sticky posts. The first was to his wife and said, “I will be back. I love you. Don’t worry about me.”

He wrote a second note for himself, which had become a part of his routine after reading a Police1 article. He posted the note on his dashboard that said, “Not today!”

THE MOMENT OF IMPACT

John arrived in the area of the Everglades where the illegal activity was reported but soon discovered that the poachers had already abandoned the scene. As he returned to his vehicle, he took a moment. He was 45 minutes outside Naples, Florida, deep in the everglades, and the sky was clear and cool. There was a beautiful tapestry of stars hanging over him. As he gazed for a bit, he said a prayer of thanks for all his blessings.

After this brief gift to himself of a moment of inner peace, he turned his vehicle toward home. He coasted at 50 mph along the historic Tamiami Road as it laced through the everglades. There was no traffic on the two-lane section of the old road, which was bordered on one side by a canal and by a tightly woven Mangrove forest on the other.

Suddenly, there was a car in his lane coming at him, traveling way over the speed limit. John would later say, there was “no time to react, and if there had been, there was nowhere to go…”

JOHN’S STRUGGLE IN THE MUDROOM BETWEEN LIFE AND DEATH

“I found myself in a tunnel. It must have been a near-death experience, but I cannot say what it was for sure, only what it was like,” John said. “I heard my grandmother’s voice say, ‘Wake up! You are OK.‘ With those words, I was awake, and I experienced an adrenalin surge. It felt like a TASER shot went through my spine.”

As John regained consciousness, he smelled gas, car fluids and smoke. He was enveloped in his airbags, with his shattered dashboard pressing against him. He says he was prepared because he had trained for this moment, and his training instantly kicked in

“At first I was nauseous, and everything was spinning. I became conscious of my circumstance and began my survival breathing, calmed myself down, and broke up my tunnel vision.” From that point on, he says he began to think effectively and act quickly.

John had two radios within his reach. One did not work, but the one on his vest did, and he hit the emergency button (a practiced movement), locking in his channel. He reported his circumstance, his condition and his location.

Then he thought, “Smoke.”

Realizing he smelled smoke, he reached for his Ka-Bar knife, one of the two knives he carried with him. He then began cutting the airbag away, allowing him freedom of movement. With that accomplished, he undid his seat belt, and with a great deal of effort and pain, he somehow found himself outside his squad. Although he is not certain, he believes he managed to squirm out the window of his badly crushed vehicle. “I walked five steps and collapsed.”

Realizing he was dangerously close to death, he made a conscious decision to live as he waited for help to arrive, knowing it was a long way away. This was the Everglades, after all. Then came a voice out of his radio. For some reason, an Officer Miranda, who was working four and a half hours away, took ownership of John’s plight and began talking to him. As John lay there in pain, trying to hold onto consciousness, Officer Miranda, who he did not know and has still never met, kept talking him through the ordeal.

“He kept me focused and here. He saved my life,” John said.

Finally, EMS arrived. John had suffered severe head injuries, two broken clavicles, and a dislocated shoulder. He also suffered C1 and C2 cervical and T1 and T2 thoracic spine injuries. John says that when he was transported to Naples Regional Hospital, which was 45 minutes away, law enforcement officers had blocked every intersection along the route to the hospital.

It was never determined why the driver, who died at the scene, was traveling 110 mph on the wrong side of the road, other than he was legally impaired by alcohol.

John recovered from his injuries enough to return to his career and retired in 2021 with a duty-related disability because of this terrible crash.

ADVICE FOR OTHER OFFICERS

John has become an advocate of the concepts taught by Below 100. He says these concepts helped save his life that night. John tells officers:

Beyond the tenets of Below 100 and impaired driving interdiction, John has additional words of wisdom for fellow officers:

In conclusion, John hopes that you prepare for your moment in the mudroom and stare death in the face that you decide as he did, “Not today!”