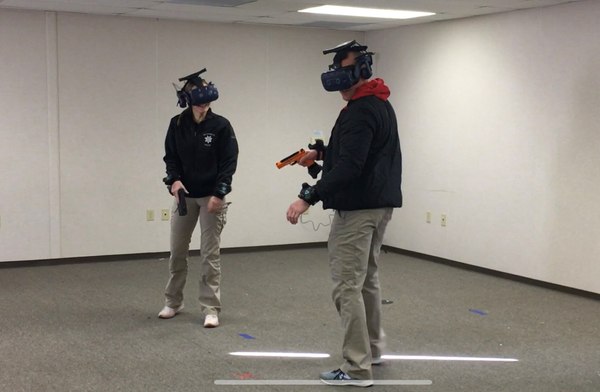 Across America, police departments are trying to better serve everyone in their jurisdictions by requiring their officers to work in less confrontational, more culturally sensitive ways.

Achieving this goal is no easy task, given the hostility and violence that police face daily. This is why agencies such as California’s Sacramento Police Department (SPD) are using VR-based training scenarios to let officers work through dangerous situations in safety so that they can become accustomed to choosing and using these new techniques in real-life situations.

“We are using VR for critical decision-making, judgment training and de-escalation training,” said Lt. Zachary Bales, the officer in charge of the SPD’s Research & Development and Continued Professional Training Unit. “Virtual reality allows us to create all those different training environments without all of the costs associated with doing so in physical settings, beyond the price of the system and preparing the instructional videos.”

The SPD decided to enhance its training following the 2018 police shooting of Stephon Clark. He was a 22-year-old Black man who was shot seven times by two SPD officers seeking a suspect involved in car break-ins.

In a bid to avoid tragedies like the Stephon Clark shooting, the SPD is using the VR-DT (Virtual Reality Decisions and Tactics) training system made by InVeris Training Solutions, which was provided to it and other California police departments by the state’s Commission on Peace Officer Standards and Training (POST).

The VR-DT system allows officers within a fixed location to interact with computer training videos produced by the SPD. They do so while wearing wireless VR headsets that track their movement in 360-degree 3D immersive environments.

The SPD trainer controlling the training session can switch between various video streams based on whatever decisions the VR trainee makes, to provide ‘consequences’ for their choices. In some circumstances, the trainer can even provide the voice(s) for the characters being interacted with. These sessions can be recorded so that the trainee can be debriefed on their results and given advice to achieve better outcomes next time.

Despite the use of VR headsets, the actual content created in these sessions is similar to traditional in-person physical training. This is no coincidence: “In both circumstances, we develop training goals,” Lt. Bales said. “We develop a script for everyone in the scenario except for the trainee, such as the ‘suspects’ and the ‘witnesses.’ And we plan out the paths the scenario can take, depending on the choices the trainee selects.”

The power of repetition

There is nothing like repetition to reduce an officer’s reaction to stressful scenarios. The act of dealing with the same situation repeatedly reduces their physiological reactions to it while allowing the officer to become calmer and more thoughtful in their responses. Add the fact that repetition allows just-taught behaviors to become habitual – giving young officers the experience of veterans – and one can see why trainers use this technique so much.

VR training allows the SPD to tap into the power of repetition.

“We can get in multiple repeats of training scenarios, with after-action reviews, in a time and cost-effective manner,” said Lt. Bales. “This allows our officers to see what happens when they choose different options while reducing their stress responses due to repetition.”

This kind of “desensitization training” is already being used by the military to help soldiers think calmly and clearly in life-threatening circumstances.

At the time this article was written, the SPD was still fine-tuning its VR raining process. As a result, the system had yet to be rolled out force-wide, or to generate tangible results to build trust with the public.

“We’re still working on ‘training the trainers’ and working up our VR program within the SPD’s training division,” said Lt. Bales. “But so far everybody that’s been in the training environment has had a very positive response to it.”

Meanwhile, after COVID-19 restrictions are relaxed, the SPD plans to invite community leaders and the media to experience its VR training system, to boost public confidence and show that the department’s commitment to de-escalation is being put into action.

As for the SPD’s advice to other departments considering VR training?

“You need to first define the goals you want to achieve, and then determine if VR will help you get there,” Lt. Bales said. “For instance, VR is not ideally suited for marksmanship training. But it is useful for allowing officers to improve their decision-making and judgment skills in real-life situations, without anyone being put at risk.”

By Jason Williams and Brian G. Anderson Tourniquets have become standard equipment for most members of law enforcement and have proven to be an important…