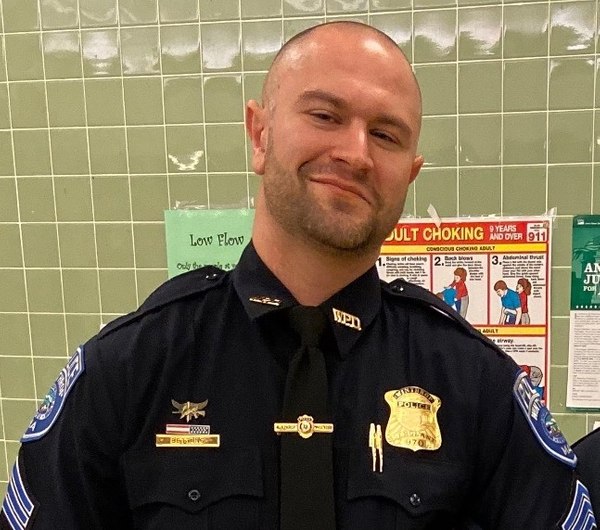 On Saturday, June 28, 2021, at about 2:30 p.m., Nathan Allen stole a large box truck from an industrial site and set out on a self-appointed mission to murder people he did not know.

As Allen sped through Winthrop, Massachusetts, he swerved into the path of an oncoming GMC truck, hitting the vehicle head-on. The initial impact deflected the box truck, which jumped a curb, crossed a lawn and smashed through the wall of a home, which collapsed upon impact.

Allen crawled out of the rubble and ran barefoot up to an occupied SAAB hatchback. He jumped into the back seat and ordered the driver to, “Drive!” adding, “The world is all messed up.”

Paulo Correia, the Saab’s owner was momentarily confused because he thought Allen was possibly injured in the accident. When he realized Allen was a carjacker he forcefully barked, unintimidated, “Get out of my f—ing car!”

Allen, even though he was heavily armed, complied and ran off.

Allen, who was now brandishing a 45 caliber semi-automatic, ran directly up behind a pedestrian, 60-year-old Air Force veteran Ramona Cooper. Allen cruelly gunned her down from behind and shot her three times in the back.

Hearing these shots, a 68-year-old Viet Nam-era Air Force veteran and retired state trooper, David Green, spotted Cooper down on the pavement with Allen standing over her, gun in hand. He pulled a neighbor, Bill Leach, back and directed him to cover. With that accomplished it is believed that instead of taking cover himself, Green chose to move into harm’s way, possibly to attempt to disarm the shooter or defuse the situation. Instead of accomplishing either of these noble ends, retired Trooper Green was shot seven times. Both Green and Cooper died from their wounds.

At 2:45 p.m., Sergeant Nick Bettano of the Winthrop Police Department had just about reached the end of a long double shift when he took the call from dispatch of a serious truck versus house accident. While responding with lights and siren, Bettano was informed by the dispatcher that the situation had turned into an active shooter incident, in progress.

As Sergeant Bettano arrived and exited his squad he saw a victim lying face down on the pavement. He asked a stunned bystander, “Where is he?”

The person pointed behind Bettano. Nick abruptly turned and spotted Allen who was 150 feet away and armed with a 45 caliber semi-automatic handgun, ominously closing the gap between himself and the officer. Bettano darted to a telephone pole but decided that this was not good enough cover, so he relocated and put a brick building between himself and the suspect.

After the civilians were safe behind cover, Bettano moved to a motor vehicle that provided cover and ensured those civilians would be out of the line of fire.

Sergeant Bettano shouted five times for the suspect to “drop the gun!” Bettano, a highly trained member of the regional SWAT team, later said of these desperate moments, “I feel that because of the training I received in the military, and from my department, I didn’t experience tunnel vision. I was acutely aware of everything going on around me except I couldn’t hear any of the radio traffic.”

After reaching the car, the sergeant watched as Allen approached to within 20 feet of him and raised his weapon to fire. Bettano was ready for him and fired in defense of himself and the nearby civilians, as well as the many innocents Allen intended on killing that day if the sergeant failed to prevail. Bettano fired until Allen dropped the weapon and fell to the pavement. He said, “I didn’t know how many rounds I had fired, but I knew I was not empty because I hadn’t experienced lock back.”

With the suspect down, Bettano approached Allen and holstered his weapon. It appeared the killer was incapacitated by the mortal wounds he had sustained. A Winthrop detective arrived on the scene and Bettano directed her to secure the shooter’s weapon, which she did. Bettano asked the detective’s husband, who was not law enforcement, to stop traffic until other officers arrived.

Bettano, who had a trauma kit on his vest, cut the shirt of the suspect open to reveal four gunshot wounds. He applied QuikClot to the most serious wound near the neck and, as he brought out a patch designed to seal another sucking chest wound, the suspect came to life and stood up, flailing. Bettano explained, “He was trying to escape.”

Bettano found it necessary to take Allen to the ground with a wrestling-type take-down and he held him there, while Allen continued to try to break free, without success. While Bettano restrained Allen, quite amazingly, he was focused enough to apply the seal over the sucking chest wound.

As other officers arrived, Bettano directed the first of them to check on the status of Allen’s victims. Others assisted him in strapping Allen down to a stretcher. Despite Sergeant Bettano’s valiant efforts to save the killer, Nathan Allen died from his wounds.

A drug screen run on the suspect is still pending.

Why did this happen?

Winthrop Deputy Chief John Goodwin revealed that 28-year-old Nathan Allen had flown completely under the radar before the event. Outwardly he appeared stable, achieving a Ph.D. in physical therapy and even marrying recently. However, the investigation revealed that he had been self-radicalized. In his book he called “The Allen Diaries,” his writings spewed forth his hatred for people of color as well as for people of the Jewish faith. In this book, which was adorned with swastikas, he also diminished women and concluded, “Men have to kill things.” Nathan Allen had no criminal record up to the day his hate consumed his reason and he set off on this deliberate murder rampage.

Goodwin speculated that Allen stole the largest truck he could find, armed himself with not only the 45 caliber semi-automatic but also a 9 mm semi-automatic, with the intention of driving to and into a Jewish synagogue to open fire on the congregation. Goodwin felt the crash was not a deliberate act but caused by his inability to control such a large truck.

Deputy Chief Goodwin added that Winthrop has proactively developed a cooperative relationship with the prosecutor’s office, which helps in all situations, as well as in the aftermath of this officer-involved shooting.

He praised the city leadership of Winthrop with its population of 19,000 for being well prepared in advance to support those who witnessed and were involved in this incident to effectively debrief. The deputy chief shared that before this incident he was not sold on the value of post-incident critical debriefing, but after seeing this all play out, he recommends all agencies prepare to render emotional aid to help officers recover after responding to traumatic incidents.

Goodwin also said that even though there had not been an officer-involved shooting in Winthrop for “about a hundred years,” he had been very insistent upon his officers being trained so that they could be at their best when the situation was at its worst.

Sergeant Bettano was kind enough to share some insights on how others faced with such a challenge could prepare to prevail as he did:

This day was indeed a tragic day for Winthrop. Two lives were lost. However, it could have been much worse if Sergeant Nick Bettano had not arrived to dramatically demonstrate that when defenseless citizens are faced with death by a bad man with a gun, the only viable solution to the problem is an honorable well-trained gunfighter.

Someday the honorable gunfighter could be you. Prepare!

NEXT: How to stop the active shooter

This article originally appeared in The Chief’s Chronicle; New York State Association of Chiefs of Police. Reprinted with permission. Over the last year the concept…

Submitted by Lt. Georgiana Cleverley What happened? I responded one night along with another officer to a 911 call where the caller and a friend, who…