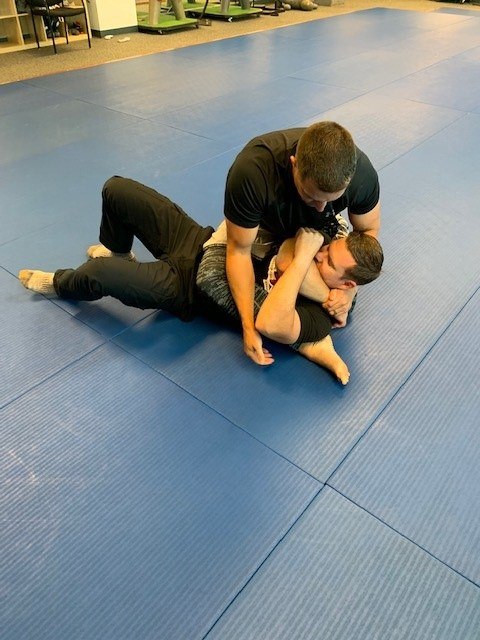 After spending the first few years of my career assigned to patrol, I was selected to fill a vacancy in our gang detail.

Surrounded by several partners who were at similar points in their careers, we proceeded to patrol neighborhoods riddled with gang violence. Our contacts would often end in some type of use-of-force scenario, and we did what we were trained to do; punch, kick or elbow suspected criminals into submission.

Even reading that last sentence out loud sounds terrible. In America, we don’t police via fear and intimidation – or do we?

After injuring my hand while taking a suspect into custody and having a conversation with a supervisor regarding the amount of force our detail was using, I asked myself how it was possible we were doing exactly what we had been trained to do and still be wrong?

As I began looking for other options, one of my co-workers suggested I try Jiu-Jitsu. While I wasn’t fond of wearing what looked like oversized pajamas and rolling around with others who were sweating profusely, I gave it a shot. Within the first 20 minutes of class, I was shocked at how easy it was for experienced grapplers to control me. I was utterly controlled without being able to use any of the strikes for which I’d received training as an officer.

Over the years, I attended arrest and control training blocks, both in the police academy and repetitive in-service training, but had never seen anything like this. While I was on my own journey to identify additional ways to effectively control suspects, America and eventually the rest of the world, also saw the evolution of grappling through the explosion of mixed martial arts. To be specific, the UFC. Grappling arts took the world by storm, proving to be more effective than boxing, karate and other standing combative systems during physical altercations, and indirectly, during use-of-force situations.

So why then has law enforcement failed to capitalize on the proven effectiveness of grappling arts to control combative suspects without injury to the subject or the officer attempting to make an arrest?

A 2013 study on law enforcement training academies by the U.S. Department of Justice reported that, on average, academy recruits spent 71 hours on firearm instruction, 60 hours on self-defense instruction and only 21 hours on the use of force. Recruits received a median of 16 hours of non-lethal weapons training. Even though officers utilize self-defense techniques and deploy non-lethal weapons at much higher rates, use-of-force training typically focuses on deadly force situations. [1]

A significant amount of the time spent on arrest and control techniques focuses on strikes and achieving compliance through physical pain, even though strikes are statistically proven to injure both the striker and their opponent at higher rates. [2] There is currently no mandated grappling-related training required, even as some agencies are beginning to incorporate the grappling arts into their training programs.

In 2019, the Marietta Police Department in Georgia took center stage in the national media after a video of an arrest at a local restaurant went viral. The footage showed several officers striking a man multiple times while attempting to take him into custody.

The public outcry over the perceived excessive use of force left both the community and the department searching for better ways to arrest suspects safely and efficiently. In response to that incident, the department implemented a mandatory Jiu-Jitsu program later that year to provide additional training to their personnel and establish a safer custodial environment for both officers and arrestees.

A subsequent study found that, over a two-year period, there was a 23% reduction in TASER usage by officers, a 48% decrease in officer injuries, a 53% reduction in civilian injuries and a 59% decrease in overall use-of-force by Jiu-Jitsu trained officers. [3] The data clearly supports a broader consideration of the effectiveness of grappling arts in law enforcement settings.

The results in Marietta, Georgia were so compelling that Gracie University, one of the largest Jiu-Jitsu training academies in the United States, created a curriculum titled “Gracie Survival Tactics” (GST) specifically for law enforcement professionals. With over 500 affiliates nationally, they provide structured consistent training for law enforcement professionals throughout the country. Currently, GST is POST-certified in 35 states. [4] Other privately funded entities are also looking for ways to change the police use-of-force training culture.

The Adopt a Cop BJJ nonprofit organization is a private donation-based organization that partners with local BJJ academies to provide free training for officers for 12 to 18 months. [5] The organization’s goal is to get all Brazilian Jiu-Jitsu academies across the country to allow police officers to train for free to create better trained and more effective police, and ultimately save lives across the board. [5]

The Adopt a Cop program is relatively new, and they have not yet published any data on their progress getting agencies to participate. That hasn’t stopped others from working to fill this need. Jiu-Jitsu Professor Sean Roberts owns and operates Sektor Jiu-Jitsu in Chino, California. He has begun to work with local police agencies to supplement costs for officers who want to train at his facility. According to Professor Roberts, over 15 officers attend classes at his academy on a regular basis. Their experience ranges from white to black belts, and he has heard several success stories related to officers using their Jiu-Jitsu skills in the field with success (and no adverse media). [6]

Why aren’t more agencies implementing this type of training? A 2015 study pointed to a lack of time as the primary reason why officers don’t train in Jiu-Jitsu, with added reasons of cost, fear of trainee injury and ego. [7]

Change is on the horizon for many issues in policing, including how officers use force, and to what effect. As those changes take place, it is critical to assess the amount of training required to be proficient, and how law enforcement organizations can revamp their use-of-force training programs. From reviewing sources related to the use of Jiu-Jitsu as a primary self-defense and control technique by police officers, the following are recommendations to revamp use-of-force programs:

Ego can be a devastating hurdle to establish effective change. Suddenly becoming a novice instead of a trained practitioner can be uncomfortable for a veteran officer. To overcome this deficit in skills, state-mandated training requirements are not enough to create expertise in any field.

Malcolm Gladwell coined the 10,000-hour rule, which is the amount of time it takes to become an expert in any field. [8] While 10,000 hours may seem overkill and many officers may not need to be experts, what should the standard be for arrest and control tactics? California POST only mandates 8 hours every two years of arrest and control techniques. Most states have similar or fewer training requirements. [2]

More than 99% of use-of-force incidents involve non-lethal control techniques; however, most law enforcement training classes revolve around deadly force situations. In most situations, the officer’s uniformed command presence is enough to gain compliance; however, minimally trained officers are unprepared when suspects refuse to comply. The lack of training can cause an increase in adrenaline and extreme tunnel vision. Officers who consistently train in highly stressful grappling environments are used to being in those highly scrutinized scenarios, minimizing any adrenaline dump or tunnel vision. This also increases confidence and allows officers to trust in their abilities as opposed to aggressiveness.

Most agencies have at least one (if not several) grappling academies within their jurisdictions. For example, there are over 200 schools in California, and many of the owners already hold some state defensive tactics certification.

Identify academies within your area (many already frequented by local law enforcement officers) that are willing to establish partnerships. Many of these school owners with state certifications provide opportunities for personnel to receive additional training outside of work.

The Marietta Police Department partnered with a local Jiu-Jitsu academy and arranged for the city to reimburse the school monthly at a per-visit rate. This public partnership option allows agencies to work with certified trainers and employees to train on their own at a minimal cost to their cities.

With the explosion of Mixed Martial Arts and Ultimate Fighting Championship over the last decade, nearly every agency has a POST-certified defense tactic expert within their department. In fact, most agencies already have personnel who consistently train in various grappling arts.

Creating partnerships with grappling academies in your area increases officer participation and interactions within the community. Building trust and transparency with the citizens we serve is a core pillar within the President’s Commission on Law Enforcement and the Administration of Justice Final Report. The Commission’s report explained, “There are grave consequences when communities lose their trust in law enforcement and its capacity to administer justice and safeguard the American people.” [9] Embedding our officers in community activities such as martial arts training gives agencies another avenue to develop positive relationships.

Recently, almost all governing bodies have seen increased demands for de-escalation and mental health training throughout the law enforcement profession. Training officers to become comfortable during use-of-force scenarios reduces the risk that deadly force will be required. Increased confidence and communication skills are essential to developing competent trainees and, ultimately, field officers.

Many agencies are already adopting briefing training curriculum but fail to add physical arrest and control curricula to their in-house training programs. In addition to one hour of use-of-force training per week, incorporate 30 minutes of de-escalation training, report writing and mental illness training during other discussions throughout the week. Accurately documenting use-of-force incidents and adding a de-escalation curriculum provides administration and legal representatives with defendable training programs to limit liability for our officers and communities.

Police use-of-force training has failed to evolve with best practices. In fact, most training methods haven’t changed in the past 30 years.

Experts in the field have identified grappling arts as a necessity for law enforcement, but administrations across the country continue to be slow to engage. If the training cadre continues to give officers the minimum amount of training, officers will continue to perform with minimal skill. Often, deadly force during non-deadly situations reflects inadequate training and minimal standards.

We can minimize injuries and maximize trust with effective community support and an abundance of proper training that provides safe environments and exceptional techniques. These changes will undoubtedly benefit the profession, the public and officers. [9]

2. Garner J, Maxwell C. Measuring the amount of force used by and against the police in six jurisdictions. Office of Justice Programs, 2002.

3. Invictus Leo Jiu Jitsu Collective. How they made Jiu-Jitsu mandatory, 2021.

By Mike CarterThe Seattle Times SEATTLE — The two officers roll up on a disturbance at a Burien park to find three men in a scuffle, one…